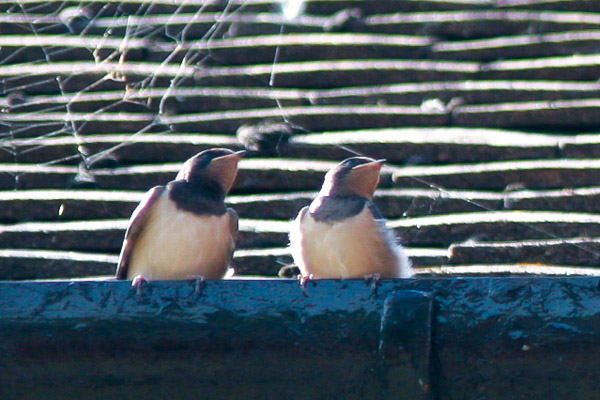 As house martins begin to return from a winter in Africa, the British Trust for Ornithology (BTO) are asking those people fortunate enough to have them nest under their eaves to get nosy and watch what they do throughout this spring and summer. They would like people to follow and record the nesting activity of their house martins to help understand why the birds are in trouble, for their House Martin Survey.

The house martin is a summer visitor to the UK and builds a circular nest using around a thousand beakfuls of mud. It is in rapid decline in some parts of the country and is ‘Amber-listed’ as a bird of conservation concern. However, in spite of the strong decline in England, 50% between 1989 and 2014, the good news is that its numbers are currently increasing in Scotland and Northern Ireland.

The BTO are looking for volunteers who are able to observe a nest, or a group of nests, for a few minutes, approximately once a week throughout the breeding season (which can last from April to September). Volunteers do not need to be able to look inside the nests, as all observations can be made from ground level (or from another vantage point where the nests can be safely viewed without disturbing the birds). After recording a small amount of information about the site on their first visit, on each subsequent visit they will simply need to record the condition of each nest and what activity is taking place.

Volunteers are free to pick their own study site, which can be anywhere where house martins are nesting. The survey is ideal for those who have house martins nesting on or near their home or place of work, but nests elsewhere can be studied, provided they can be visited regularly for the whole breeding season. The BTO are looking for volunteers throughout the UK, as they are hoping that observations from areas where they are increasing will help identify why they are declining elsewhere.

House martins return to their breeding sites about now (late April), and usually prefer to occupy existing nest sites if they are available. In 2016, nest building and repairing activity peaked during May and the proportion of nests with young peaked in late June and early July. The 2017 survey begins in April, when volunteers will be able to find further information and register via the BTO House Martin Survey pages.