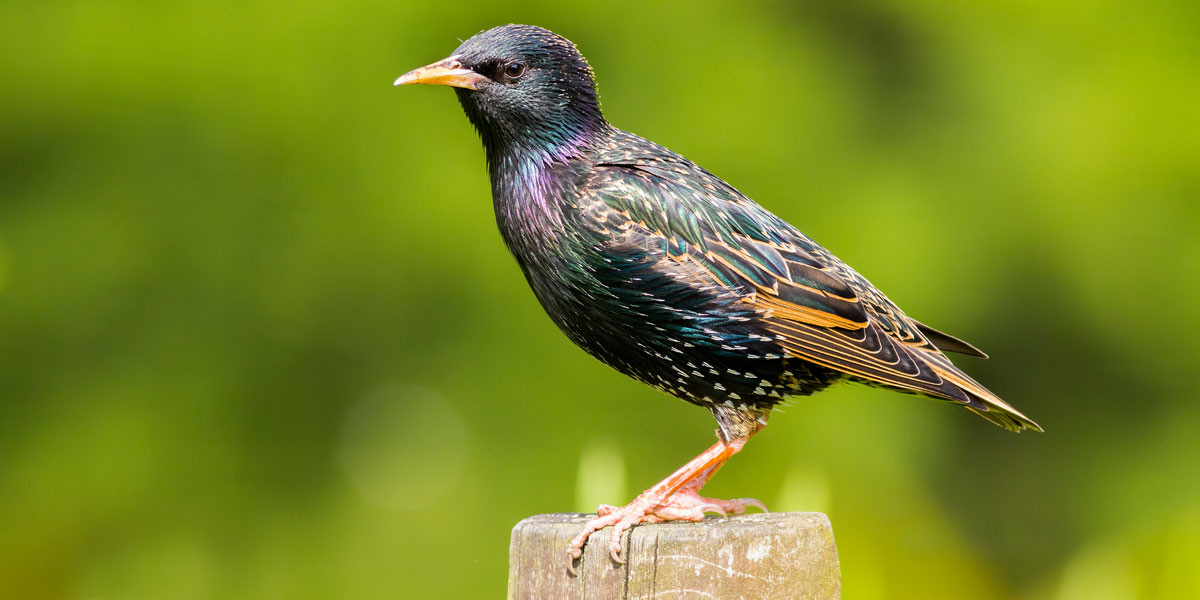 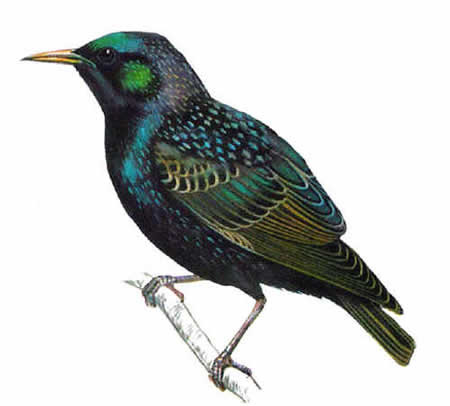 The Starling is compactly built with a short tail and long, pointed bill, pointed wings, triangular in shape, which make them distinguishable from the Blackbird when they are in flight. Adults have a green and purplish metallic sheen on the black plumage. The breast is spangled with small, pale spots, more heavily marked in winter. The bill changes colour from a grey-brown in winter to a conspicuous lemon yellow in summer. The young are a dull grey-brown colour with a paler throat than the male and an unspotted breast.

The Starling may be confused with the Blackbird, but the shape of the wings and shorter tail help to distinguish it. Their flight is direct and fast with rapid wing beats. It is a highly gregarious species and is often seen in huge flocks.

Its usual call is a harsh ‘tcheer’. Their song is whistling and chattering. They often mimic other birds.

Breeding starts from mid-April. They nest in loose colonies and isolated pairs. The nest is situated in holes in trees, buildings, in nest boxes and sometimes in holes in the ground. The nest is a loose cup-shaped accumulation of stems, leaves and other plant material. It is lined with feathers and moss. The male begins the construction of the nest before pairing has occurred, the female will then complete it. Both sexes incubate for twelve or thirteen days. Both tend the young, which leave the nest after about twenty days.

They like areas with scattered trees, including parks and gardens. They also frequent cultivated areas and moorland. They are also seen in city centres roosting on buildings and in trees.

What do starlings eat?

If you want to attract starlings to your bird table to marvel at their antics and appreciate their shimmering feathers, take a look at the foods they eat.

Many starlings do not migrate at all, particularly those living in temperate areas of western Europe, such as the UK. The same is largely true of those birds resident to the mainland USA and close by.

Those European starlings that do migrate generally don’t venture too far, heading north and west to breed during the summer, and escaping winter temperatures by travelling south.

What are European starlings?

Also known as common starlings, European starlings have now spread to every continent, having been introduced to North America, South America and Australia. Due to their successful colonisation of these areas, they are often regarded as an invasive species.

However, their numbers are falling swiftly in some of their native lands, even as they thrive elsewhere. In the UK, there are currently around 1.8 million breeding European starlings. 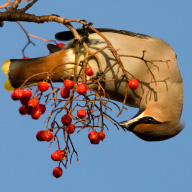 Get ready for the influx…